An excellent restoration by the owner Nic Barker. All markings shown above (except UK registration number) have been copied from the originals which were typically daubed with paint prior to sale at public auction in France. The Armée de terre insignia (sword and tricolour) indicates that this jeep remained in active service into the 1990s. Other interesting features include 'MORT-HOMME' ('Deadman') painted on the side of the bonnet - it is a custom that vehicles in the French Cavalery are named, usually after French towns or famous battles. (Mort-Homme is near Verdun and the "Chemin des Dames", scene of a bloodbath in 1917.) 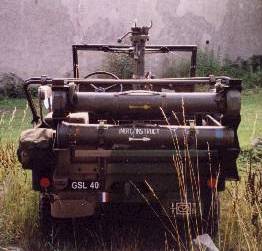 The jeep served with the 3rd Squadron of the 1st Hussars, an airborne regiment forming part of the 11th Parachute Division. The 1 RHP is one of the oldest regiments of the French army founded in 1720 on horse back. The 3rd of its 6 squadrons is an airborne anti-tank unit, renowned for its mobility and firepower, and consisting mainly of Milan launching M201 jeeps during the 70s and 80's .

The Hussars' motto is ‘ beyond the possible, beyond danger’. Nic's website has closed since he moved to Australia so I have added some of the photos and details to the owners gallery on this site.